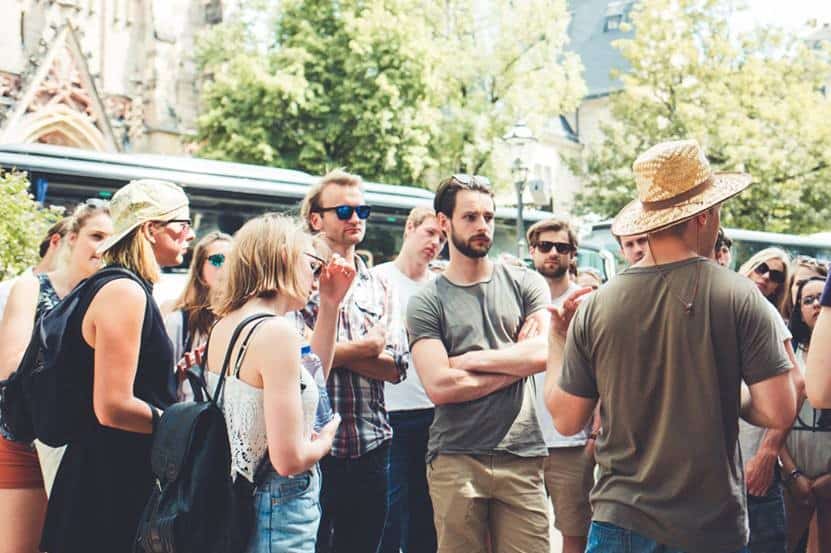 Today, Leipzig is one of the most popular tourist destinations in eastern Germany, and thanks to its rich cultural and musical heritage, is regularly cited as one of the most livable cities in Europe. For tourists, it is a very manageable city, with many things to do right in the compact Old Town.

To start with, we recommend our classic Old Town Walking Tour. This tour is for everyone who wants to get an overview first. Here you will get to know the old town intensively, the most important sights as well as many hidden places. Set out to discover St. Thomas Church and St. Nicholas Church, hear about the peaceful revolution, Leipzig’s trading tradition, Goethe and Hieronymus Lotter. “Hieronymus who?” you ask? Here’s where you will find out!

For your start with Leipzig, we recommend a classic overview tour on foot. However, we also offer a number of specialized tours and activities opening up new perspectives for you. We have summarised some alternative tour suggestions here and invite you to discover Leipzig your way on a private city tour with us.

The passage courtyards for the trade fair, together with the arcades and trade fair buildings, characterize the special flair of Leipzig’s city centre. One of the best-known arcades is the elegant Mädler-Passage with the traditional Auerbachs Keller, where Goethe already stayed. But there is much more to discover… Here the world was gathered in a nutshell, as Goethe said. Join our guided tour and discover large and small, old and new, visible and less used passageways and passages. Let yourself be enchanted by the flair and history, and learn from your city guide how the trade tradition in Leipzig developed over the centuries.

> What role did comrade Ulbricht play in Leipzig’s urban planning in the 1950s and 60s? How did the MfS manage to keep its citizens in line for so long? Where did Honecker welcome his guests in the trade fair city? Find out how the resistance formed and why the foundation for the overthrow of the regime was laid in Leipzig… <

From Plagwitz to Lindenau – StreetArt and Industrial Culture

> From a farming village to one of the largest industrial locations in Europe following the footprints of Karl Heine. How StreetArt, artists and entrepreneurs around the Spinnerei and the Kunstkraftwerk use the old industrial buildings and what attracts people to the location… <

Gohlis Tour – From a village to a mansion district

> From Friedenskirche church, characteristic building structures from nearly three centuries open up along Menckestraße, the former main street of the village of Gohlis. Cultural-historical and architecturally and impressive are the late baroque Gohliser Schlösschen, the Schillerhaus as the last preserved farmhouse from 1717 as well as the residential houses of Menckestraße, some of which were built in Art Nouveau style. Along Poetenweg forms a stunning villa district from the beginning of the 19th century. Join us and discover its development over the centuries…. <

With some 500 significant works of art and as one of the largest cemetery structures in Europe, Leipzig’s Südfriedhof, consecrated in 1886, is one of the most important European cemeteries. A large number of important entrepreneurs, scientists, artists, and architects have found their final resting place here. Walk with us in their footsteps…. <

Leipzig in the days of the GDR during the SED regime: What was it like back then?

Come with us on a tour through Leipzig’s city centre and feel thrown back to the time of socialism. Your tour guide, a Leipzig native-born in the GDR, will take you on a journey through time and lead you to historic places you won’t forget.

Starting at Burgplatz, you’ll head to the former GDR guesthouse for state guests and the former Stasi headquarters, where you’ll learn how closely the SED regime surveilled the population. Learn where Honecker received his guests and what the building turned into. Did you know how many field offices the Stasi had throughout Leipzig and what they would have done in the event of a nuclear attack?

From St. Nicholas Church, where the Peaceful Revolution began, we walk past the Forum of Contemporary History with its museum on the GDR to the former Karl Marx Square (Augustusplatz), where you’ll hear what Walter Ulbricht had to do with the university and St. Pauli Church, which remained unscathed during the war. Via the student club Moritzbastei, where already Angela Merkel partied, you will return to Burgplatz.

What to experience in Leipzig with your tour guide?

Get A Quote Today

Where is the Private Walking Tour meeting point?

Our suggested meeting point is Burgplatz, right in the old town of Leipzig. If you let us know where you are staying, we will also gladly meet you at your hotel.