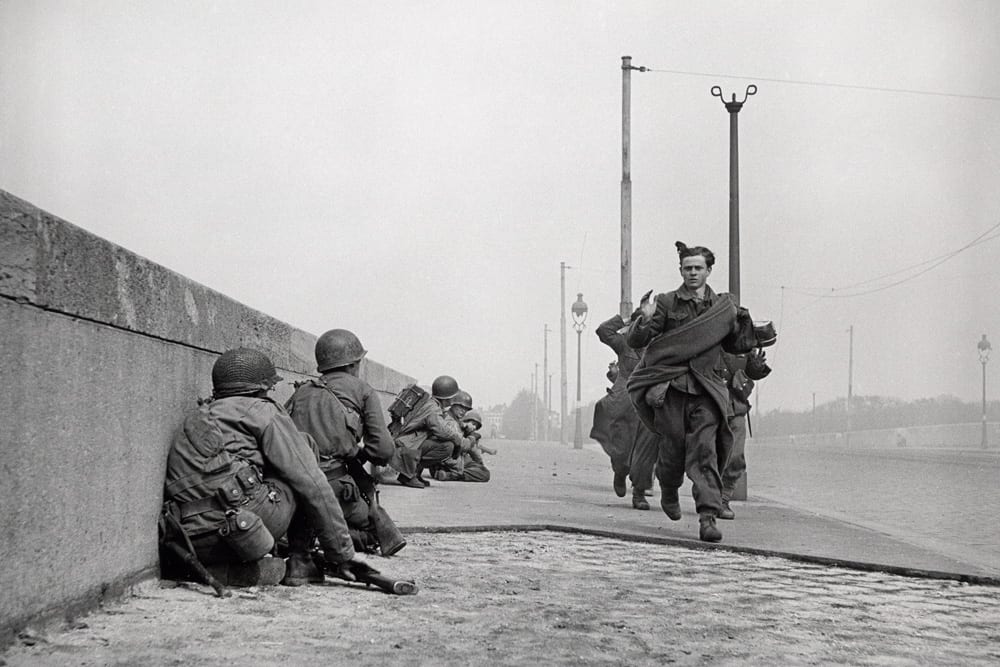 Leipzig was a city of fate for Robert Capa. It was here he took his famous set of photos “the last man to die in Europe” capturing the final moments of Raymond J. Bowman, who sixteen days after his 21st birthday, became the last American soldier to die in Germany. Bowman was shot by a German sniper as he was reloading his M1917 Browning machine gun on a balcony in a Leipzig apartment. Capa, who had accompanied the US Army’s 2nd Infantry, 69th Infantry and 9th Armored Divisions that entered the city on April 18th, took the pictures. They were published in Life Magazine as “The Picture of the Last Man to Die.” 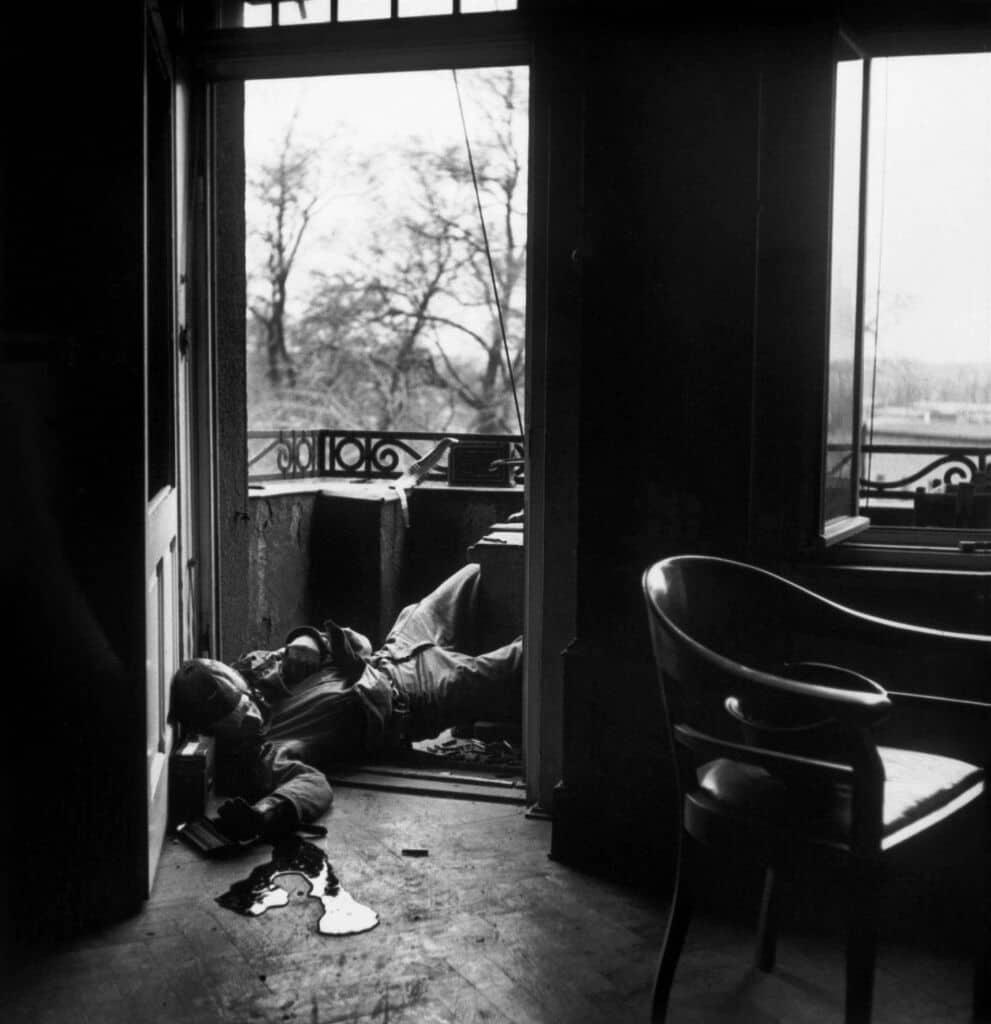 “The last man to die in Europe”

Leipzig was also from where the greatest love of his life, the German Jewish photographer, Gerta Pohorylle, hailed from. Her family had come from Stuttgart to Leipzig in 1929 and like Capa, she had fled Berlin for Paris when the Nazis came to power in 1933. They were both active communists and had been arrested by the police for communist subversion–Andre in Budapest, and Greta in Leipzig. 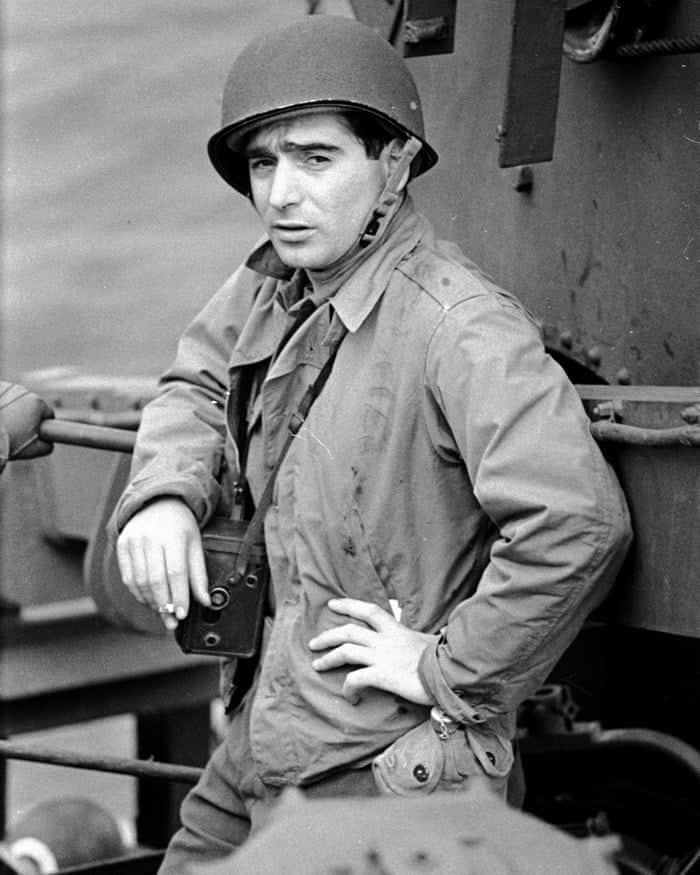 When Andre arrived in Paris, he had already taken great pictures—the most famous being  Stalin’s great enemy and Russian exile politician Leon Trotsky addressing students in Copenhagen in November 1932. A struggling refugee, he had scored a job taking publicity pictures for a Swiss life insurance company’s advertising brochure. Capa, who always had an eye for beautiful women, approached a Swiss refugee Ruth Cerf, in a café on the Left Bank of Paris and asked her to pose for him in a Montparnasse Park. Suspicious of Capa and his rakish good looks she convinced her friend Greta to accompany her. Capa was disorganized but talented, Greta was charming and organized. They fell in love and also became partners. Together, facing anti-Semitism in Paris, they created the fictional photographer, Robert Capa, a non-existent famous American photographer who was always either covering a war or living it up in Monaco. Friedman took the pictures, Greta sold them. The subterfuge was soon discovered, but by then the quality of their pictures had made them famous.

The war they covered together was the Spanish Civil War.

Capa would live. Greta would die. Their photos would become immortal. 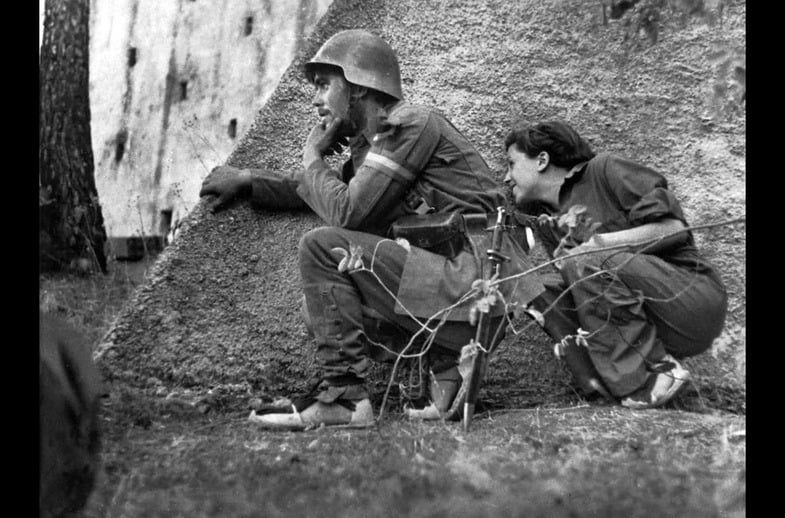 Capa and Taro covered the war in Aragon in the northeast of Spain and in the Southern Cordoba province. The photos were carried in the Swiss Zürcher Illustrierte, the French Vu, and brought them fame. At first, Taro used a Rollei camera creating squared photographs while Capa used a Leica camera that yielded rectangular frames. Later, in 1937 they each produced similar 35 mm pictures under the label of Capa&Taro. Greta later struck out on her own, publishing her photos under Greta Taro.

Together, they captured war as it had never been before. The agony. The brutality. The victory. The ecstasy.

The sorrows of war.

The German soldier dying at Normandy, being blessed by an American chaplain, and watched by a weary Red Cross doctor. Fear and loathing on the faces of Chinese civilians watching an air battle between Chinese and Japanese planes over Hankou, China. The Republican soldier hit by a sniper’s bullet, falling, captured at the moment of death. Two weary refugees walking on the road from Barcelona to France. The fear etched on the face of a 15-year-old Chinese soldier in Hankow about to embark for the front in the Sino Japanese War in 1938, the utter weariness of war refugees trudging from Spain to France during the Spanish Civil War, the men in the mud and sea at Normandy, a prayer in the air, a rock in the pit of the stomach.

Taro’s pictures–Republican soldiers cowering at a wall etched with nationalist slogans, a wounded soldier on the Segovia front in Spain, Republican soldiers in Córdoba and Aragón. Taro, had she lived, may have become as famous as Capa. However, during the Battle of Brunete, a fierce, chaotic battle near El Escorial, northwest of Madrid, in July 1937 she became the first female photojournalist to die in action. Under fire from General Franco’s troops, with bombs falling and under machine-gun fire, Taro kept on taking photos. She ran out of film and hitched a ride on the running board of a general’s car ferrying injured soldiers. As they were strafed by German aircraft supporting Franco’s troops near Villanueva de la Cañada, an out-of-control tank from the Republican army ran into the car. 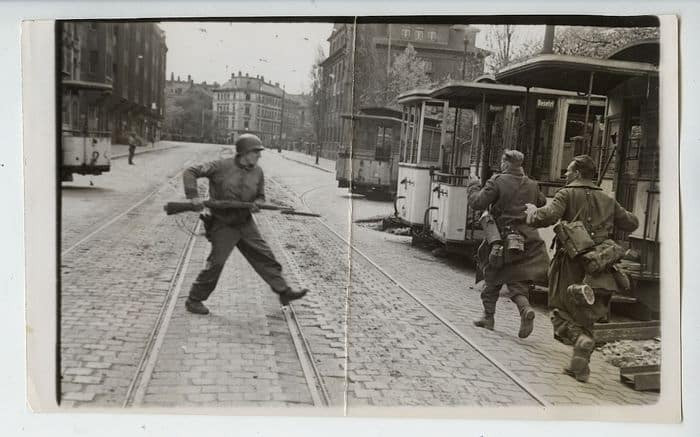 Taro was fatally wounded. A picture, discovered in 2015, shows a Hungarian doctor on the Republican side dabbing at trickling blood from the nose and mouth of a young woman with short, dark hair and finely plucked eyebrows who bears an uncanny resemblance to Taro.

Known as La pequeña rubia (“The little blonde”) her courage inspired the admiration of battle-hardened soldiers.

Capa had stayed behind in Paris, and Taro had ignored his warning to stay away from the frontline. At her funeral in Paris on August 1, 1937, thousands of people lined the streets to pay homage. Capa never forgave himself. In his quest to die in turn he would take some of the greatest pictures. He sought danger. On D Day, June 6, 1944, Capa landed with the men on the boats in the second round of the first wave–those most at risk. After Greta died he sought death. It found him. He too died by his words. In 1949, covering the First Indo China War, he stepped on a landmine in Vietnam, and died. He was only 46. 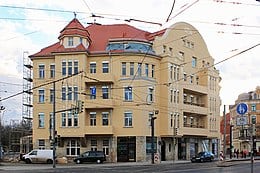