The beauty of every city has a tale to tell.

Paris. An unruly people. After all, they were the first to lop off the heads of royalty denying the central principle of pre-Enlightenment Europe– the divine right of Kings to rule. If Parisians were unhappy the cry “Aux Barricades!” rang out. The narrow winding streets of medieval Paris made it easy to create roadblocks and each street became a stronghold. Emperor Napoleon III commissioned Baron Haussmann (1809-1891) to design a new city. New squares. New parks. And broad boulevards. Beautiful. And far easier to stamp out the rebellion.

New Delhi was built by the British to impress Indians. 1911 saw nationalist unrest in the then capital of British India, Calcutta. Believing that a new capital would show how mighty an empire theirs was,  they built New Delhi. In doing so, they forgot an ancient curse. He who builds a capital in Delhi will lose the Empire. It had happened seven times before, and in 1947, to the strains of Auld Lang Syne, the last British troops left from Bombay’s Gateway of India, built to commemorate the visit of King-Emperor George V, in 1911. Their glorious Raj had been ripped asunder to create two new states–India and Pakistan. Lutyens’ Delhi is the eighth and final city.

The buildings of Leipzig are different. They stand close to each other and narrate history. Leipzig was always a trader’s town. It has been called the “Little Paris” but it is different in one key aspect. Unlike Paris, which was constructed according to a plan, Leipzig grew, one building at a time.

The town square showcases this. Six centuries of architecture stand together. The oldest city town hall in Europe dates back to 1556, built by Hieronymus Lotter (1497-1580), the eight-time mayor of Leipzig. Look to the right. The Old Weighing House rose at the same time. The revenue from customs duties and weighing charges fueled growth. Gothic. Baroque. Contemporary. They all jostle in one of Europe’s most harmonious squares fit for kings. Czar Peter the Great (1672-1725), August the Strong (1670-1733) Elector of Saxony, King of Poland and Grand Duke of Lithuania, and Frederick the Great (1712-1786) all lived in the Baroque Koenigshaus. Take a look across the square opposite Peterstrasse where the architects Weis & Volkmann have created a contemporary Trade Fair House.

Take a turn. The magnificent Old Stock Exchange is the first baroque building in Leipzig dating to 1678. The façade, decorated with festoons and garlands show the grandeur of the trade. The two-winged cherubs above the arched portal hold the city’s coat of arms. In a small city, a world was born. No wonder that In 1749, the poet Gotthold Ephraim commented: “I am going to Leipzig, to a place where one can see the whole world on small scale.”

Leipzig entered recorded history in AD 1015 as the fortified town of Urbs Libzi and was granted municipal status by 1170. In 1165, Margrave Otto der Reiche (1125-1190) bestowed trading privileges on Leipzig which t lay at the crossroads between two trade and military roads, the Via Regia and the Via Imperii. In 1497, the Holy Roman Emperor Maximillian I (1459-1519) gave the city trade fair privileges. The markets that were held twice a year—. at Easter and Michaelmas (September 29), were raised to the rank of imperial fairs. The Emperor decreed that no other market could be held in a 15-mile radius.  By 1700, Leipzig had become Germany’s foremost commercial centre primarily because of a network of roads that converged on the town.

This central position was crucial. Yet, there was a dark side. War often visited. The Thirty Years War saw two battles (1631 and 1642) at Breitenfeld (now a suburb) and Lützen, another suburb. However, the Battle of Nations, also known as the Battle of Leipzig, which ended Napoleon’s dreams of European conquest is the most famous. There would be the last gasp at Waterloo, but the Coalition armies of Austria, Prussia, Sweden, and Russia led by Tsar Alexander I and Karl von Schwarzenberg routed Napoleon’s Grande Armée. Ironically, the King of Saxony fought on the French side as part of the Confederation of the Rhine (mainly Saxony and Württemberg). This was the last stage of the German Campaign of 1813.

The thunder of the battle–500,000 soldiers, 2,200 artillery pieces, the explosions of 200,000 rounds of ammunition, rolled across the land. 127,000 men fell. A century would pass before Europe saw such carnage again–in the killing fields of World War I. Napoleon’s reputation as a military genius was in ruins. The greater part of the battlefield turned against him. As he sadly put it, “A year ago all Europe marched with us; today all Europe marches against us.”

Trade flourished, Books, furs, yarns and textiles were the main items. When the first German railroad was laid from Leipzig to Dresden in 1839, the city boomed. Banks, textile, metals. Merchants began to erect new edifices.  A renaissance.

World War I left the city untouched. World War II saw one-fourth of the city destroyed. Liberated by the Americans, Leipzig was handed over to the Soviet Union as part of the Postdam agreements. In the DDR the buildings fell to ruin, dark, dreary and depressing. Leipzig, however, continued to be a major trade fair for the Eastern bloc. It became the focal point of protests against the East German regime which ended in 1989, the 40th year of its founding

Slowly the city was restored. 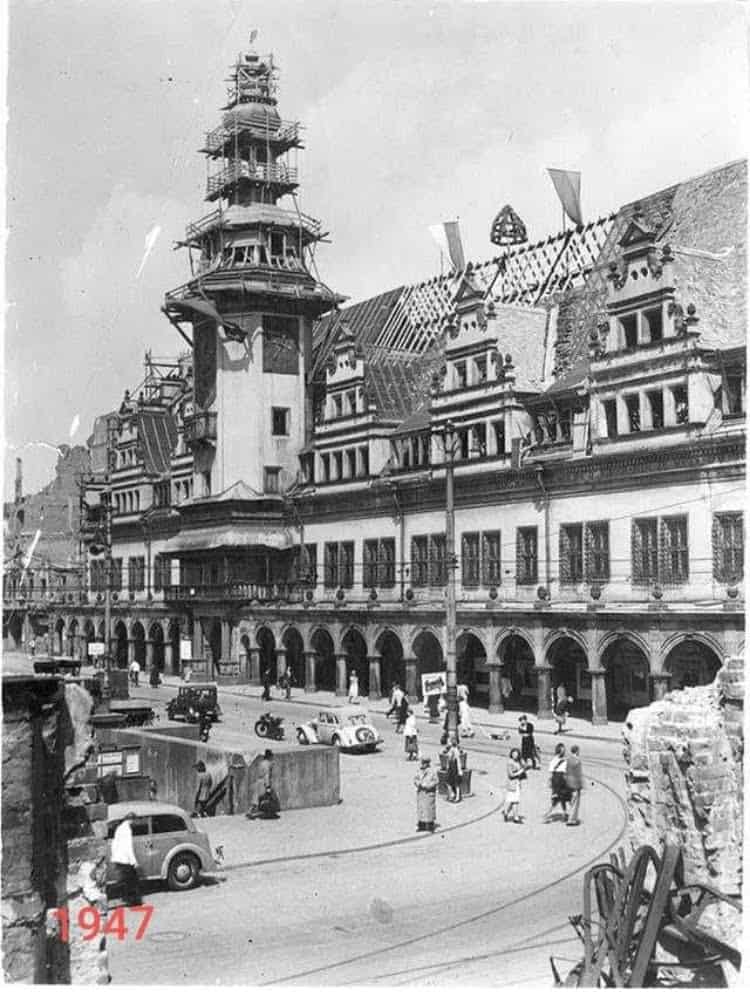 Now flourishing in their new glory are the Old Town Hall, the Old Commercial Exchange, the old residential and market squares, Auerbach’s Cellar, and the 13th-century Thomaskirche. Rising to the sky is the new University Tower. Gentrification has gradually emerged.

Nowadays, the skyline is modern. And old.

Interested to learn more about Leipzig and its fascinating history? Click HERE to book a walking tour with us!