Leipzig – Our insider tips for a perfect weekend

Leipzig – Our insider tips for a perfect weekend 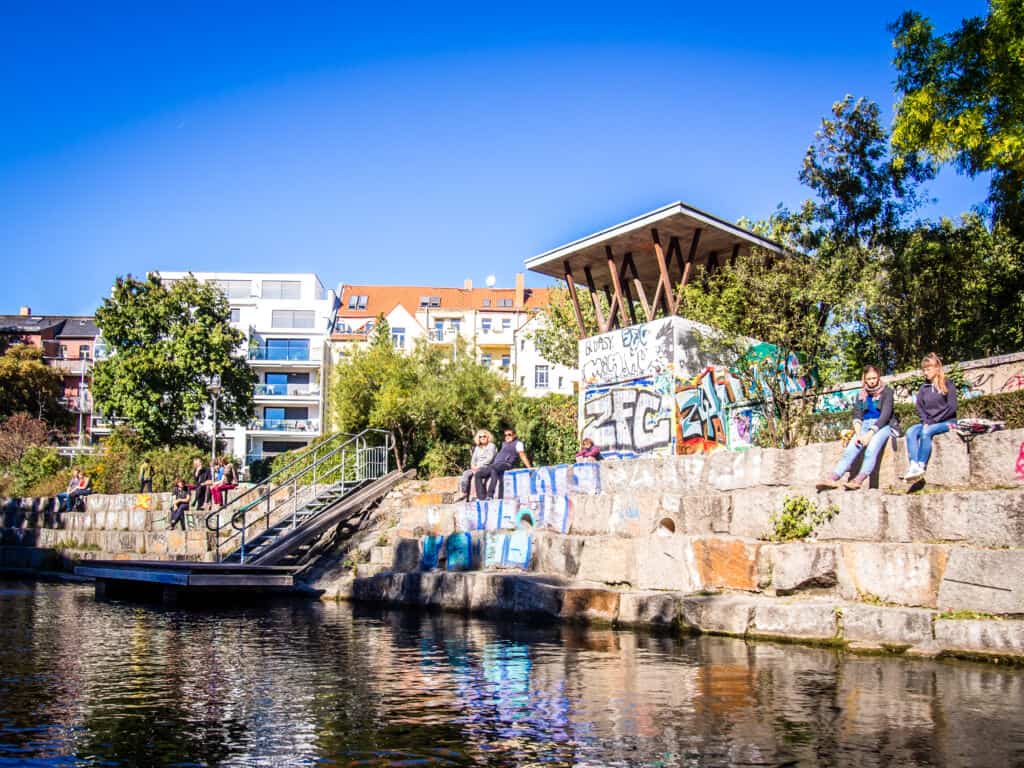 Leipzig – the city on the edge of Saxony is undoubtedly one of the most beautiful German cities and has been enjoying increasing popularity among tourists and Leipzigers for several years.

We have compiled all the important Leipzig tips for a short vacation in the trade fair city.

With our Leipzig insider tips, you will find the best places, the most beautiful destinations and the hottest clubs in the city.

For most visitors to the trade fair city, it is the first port of call, because this is where they arrive on trains from near or far:

Europe’s largest terminus is not only a train station but also a shopping centre with about 140 shops on three levels.

For example, a bookstore and a branch of an American coffee company still give visitors a taste of the flair of the former waiting halls for first-class passengers.

The structure was opened in 1915. In March 2021, Leipzig Central Station was named the most beautiful and best station in Europe 2021. The international consumer protection organization Consumer Choice Center (CCC) had rated the 50 largest train stations in Europe according to the criteria of comfort and ease of passage.

Leipzig Tip #2: Museum in the Round Corner

Anyone visiting the city should also look into the GDR’s past and the significance of the Monday demonstrations.

A Leipzig insider tip is the Museum in der Runden Ecke.

From 1950 to 1989, the building in downtown Leipzig was the headquarters of the District Administration for State Security (BVfS).

The route of the Monday demonstrations also passed by here.

Today, you can experience the history of the State Security – Stasi – in the museum:

How was work done? What were the tasks of the ministry?

What were the ideological roots behind it?

Here you can also see a replica of a prison cell and marvel at jam jars with smell samples of opponents of the regime. 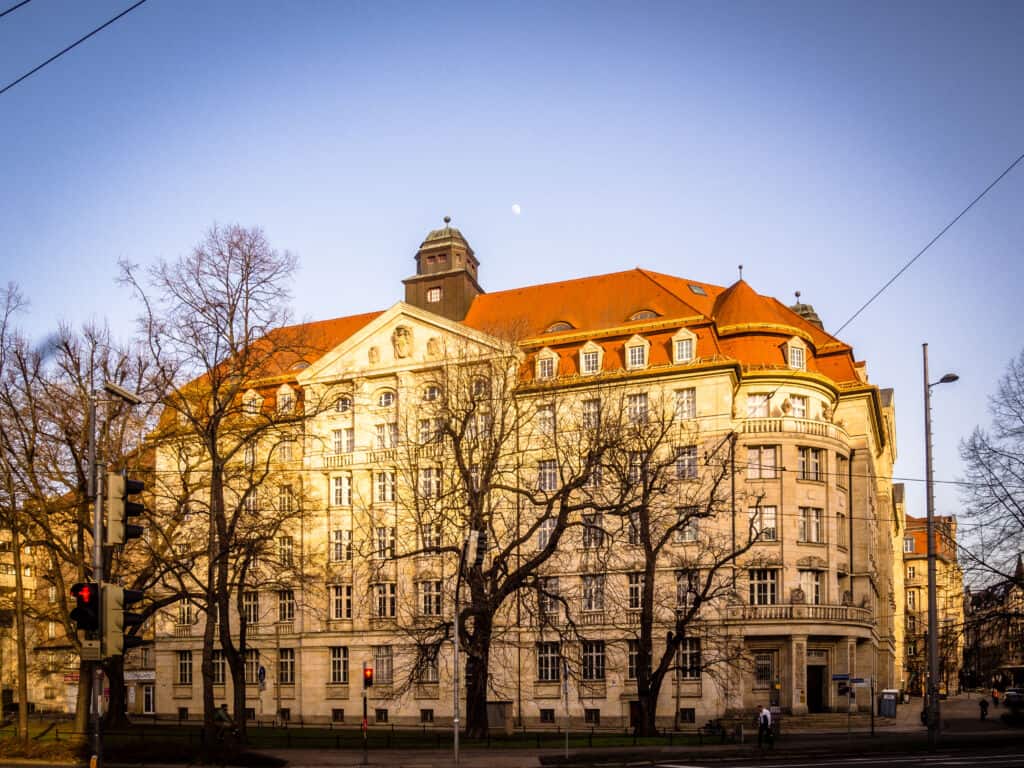 Leave the car behind. Leipzig is a city of short distances. The best thing to do is rent a bike and explore the city.

There are well-maintained and marked bike paths almost everywhere. Only in the pedestrian zone in the city centre it is not allowed to ride a bike during the day.

So you are not only fast at all important places of the city or in the green, but experience the flair of Leipzig in a very special way.

On the Internet, you can find various providers who offer rental bikes. Swapfiets is located directly at Brühl near the main train station.

You can also find Nextbike bikes throughout the city. 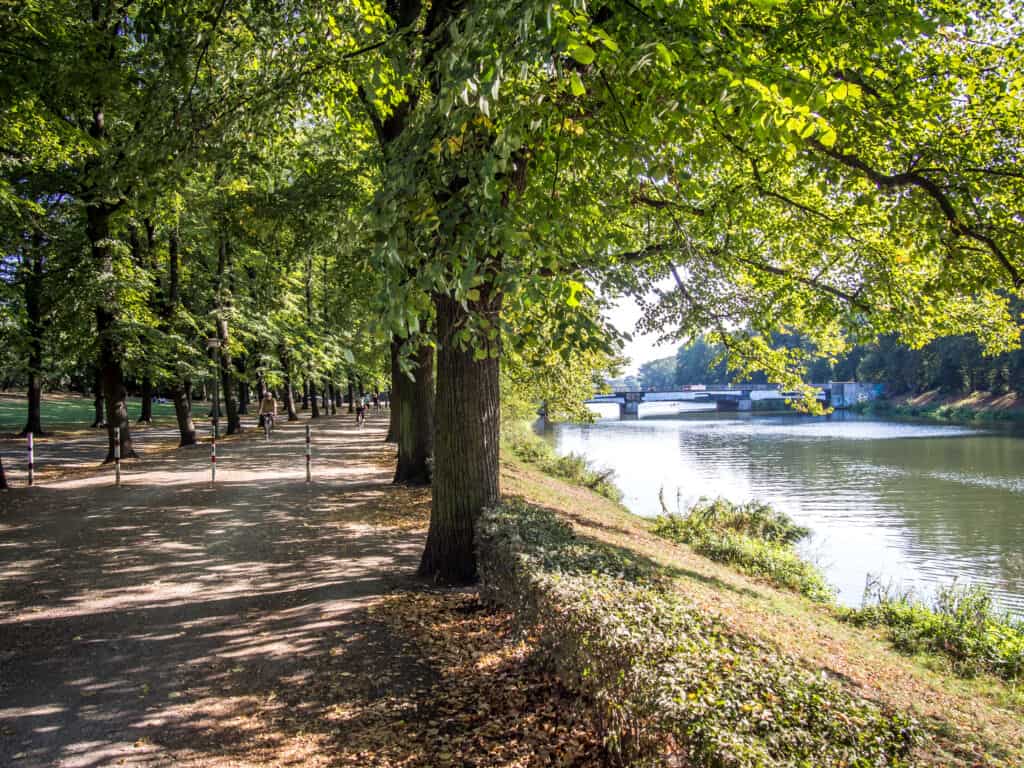 Over many years, an indispensable artistic scene has established itself in Leipzig, which has great significance beyond the city limits.

It is also called the “New Leipzig School”. One well-known artist from Leipzig is the painter Neo Rauch.

Like him, many of Leipzig’s artists have their studios in the Leipzig Cotton Mill, an approximately 10-hectare factory site in the Lindenau district.

The artists show their works in a total of 12 galleries and exhibition spaces.

The spinning mill is open daily and exudes a very special atmosphere with its industrial charm.

Guided tours of the Spinnerei are offered every hour on Friday and Saturday.

Leipzig insider tip: Three times a year, the Spinnerei tours take place on weekends. This is when new exhibitions and events are presented. Information about upcoming tours can be found on the Baumwollspinnerei homepage.

Its reputation is not the best. In the media, the street in the east of Leipzig is called the “most dangerous street in Germany”, and from 2018, the first gun ban zone in Saxony is to be created here.

On the other hand, the railroad is a street in transition. Multiculturalism instead of uniformity. Thanks to many vacant houses and cheap rents, small art galleries have settled here in recent years.

Students live here and are happy about cheap living space, which is also becoming increasingly scarce in Leipzig.

In between, Turkish greengrocers and delicious food from oriental countries.

Our tip: Enjoy the Syrian specialities of Damascus and then enjoy a good coffee across the street in the courtyard of Vary.

In the middle of the city centre is the main campus of Leipzig University, the Alma Mater Lipsiensis.

It is the largest university in Leipzig. Founded in 1409, it is truly steeped in history. It is considered the second-oldest university, after Heidelberg’s Ruprecht Karls University.

What makes it special:

The entire main campus has been rebuilt and renovated in the last ten years.

The university church, which was blown up by the SED in 1968, was replaced by the Paulinum and now houses scientific institutes, an auditorium and a prayer room, among other things.

If you look at the front of the Paulinum, round arches and windows are a bit out of place.

In this way, the architect reminds us of the demolition of the former church.

Leipzig insider tip: Next to the main campus is the Leipzig City high-rise. Also called Uni-Riese or Weisheitszahn by the Leipzigers. You should definitely keep an evening free and take an evening view over the city centre from the observation platform on top of the building. The entrance fee to the platform is only 4 EUR and has to be paid at the top. 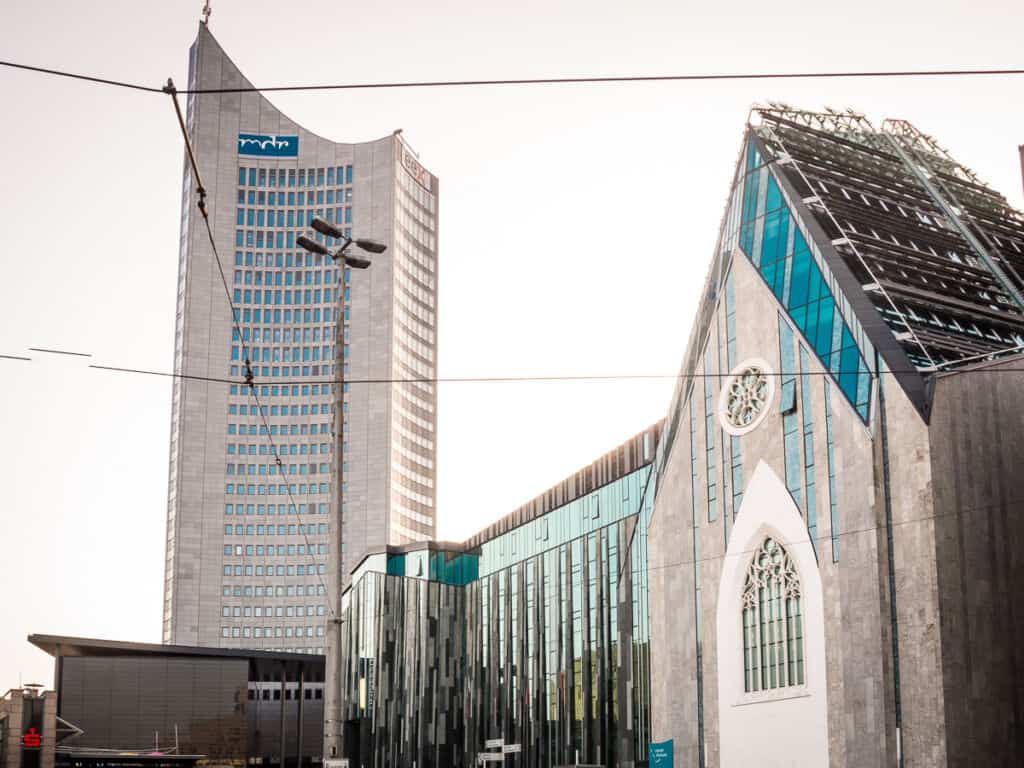 The Leipziger Neuseenland begins just a few kilometres outside Leipzig.

Where lignite was mined just a few decades ago, today there is an extensive recreational area with countless lakes.

A real Leipzig insider tip is to cycle from the city centre directly to one of the lakes via the various cycle paths.

This way you can get out of the city and into nature within 30 minutes.

There you will find sandy beaches, various leisure activities such as water skiing, saunas or other activities.

Especially Lake Cospuden can be reached quickly via “Die Linie” or “Die neue Linie” through the floodplain forest to the northern beach.

If that’s not enough for you, you can take the circular route around Lake Cospuden – known as Cossi in the Leipzig vernacular.

In the summer, Leipzigers use their recreational area for bicycle tours, jogging or rollerblading, or swimming.

If you’re looking for an even nicer way to get from the city center to the city’s lakes, you can also use a canoe.

The Weiße Elster leads all the way into the Cossi.

On the way, you will experience the floodplain forest from the waterside. 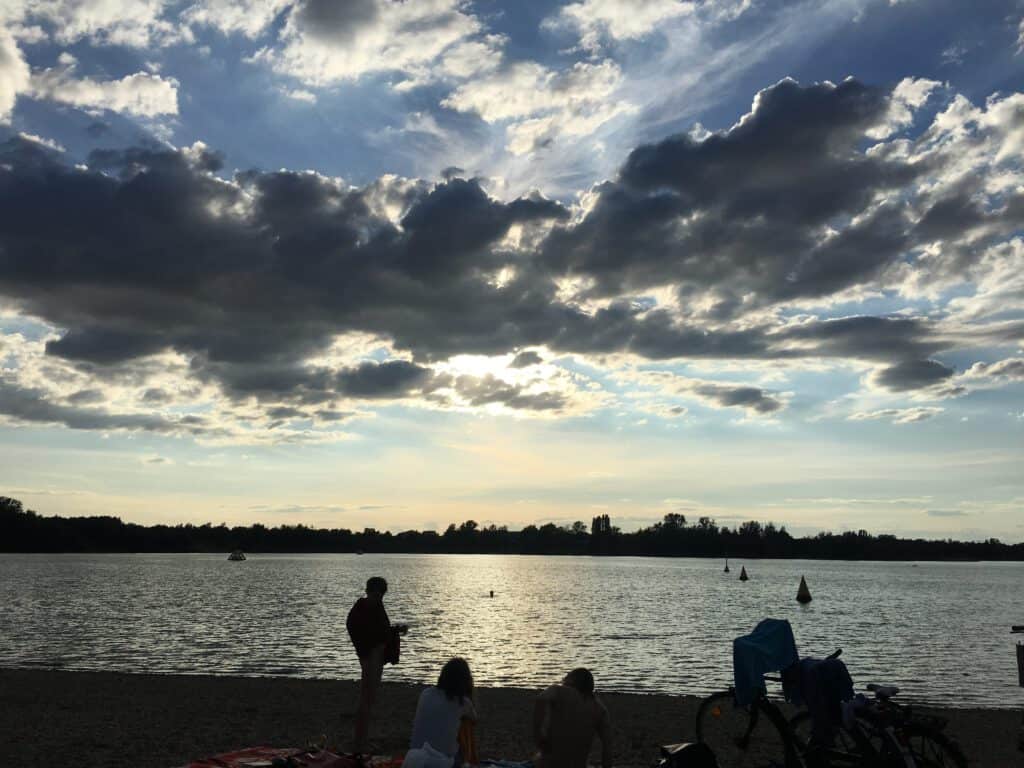 Leipzig Tip #9: The Monument to the Battle of the Nations

A real heavyweight and hard to miss in the Leipzig skyline is the Monument to the Battle of the Nations.

It commemorates the victory of the troops of Austria, Prussia, Russia and Sweden over Napoleon.

One hundred years later, the Monument to the Battle of the Nations was erected.

It is 91 meters high and has a viewing platform.

You can reach it by elevator and stairs.

Inside the monument is an imposing domed hall with a height of 68 meters.

Our insider tip: Especially in the evening, the Monument to the Battle of the Nations is worth a visit. Via the outer stairs, which can be entered even after closing, you have a great view of the sunset. 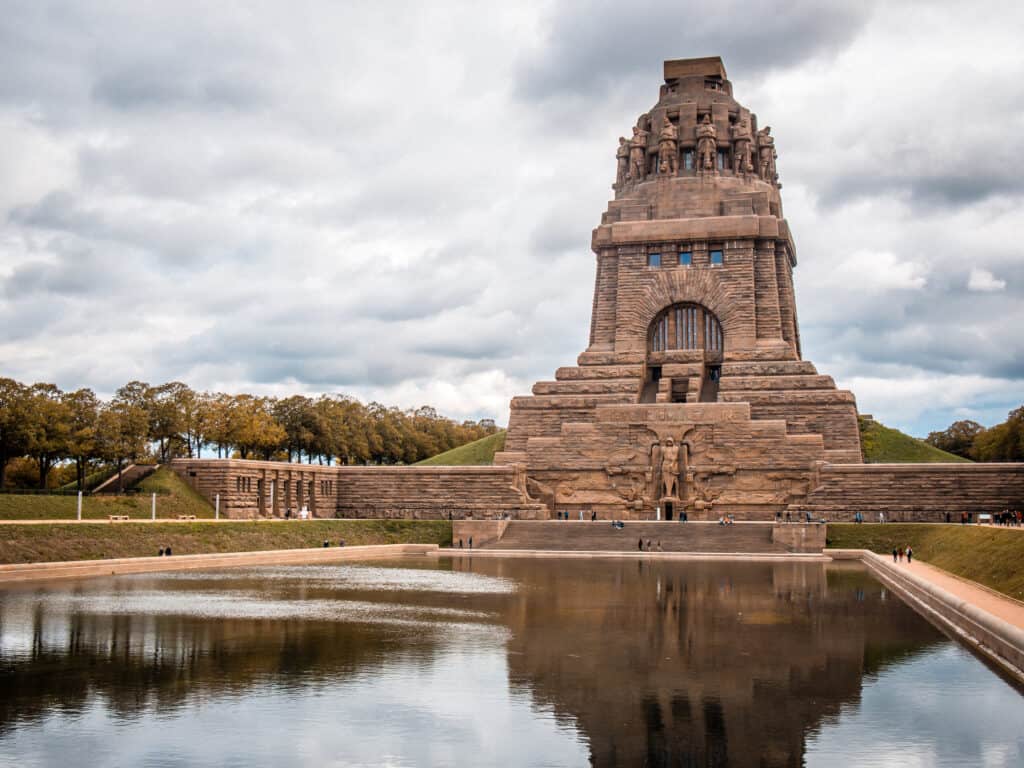 Those were my Leipzig tips for you. The suitcases are certainly already packed, what about you? Now all you need is a great city tour for an unforgettable city trip to Leipzig. Take a look at the Free Walking Tour in Leipzig. It’s a great way to get to know the city and hear exciting stories. For groups or for anyone who just wants to treat themselves, there are also private city tours. Let’s go! 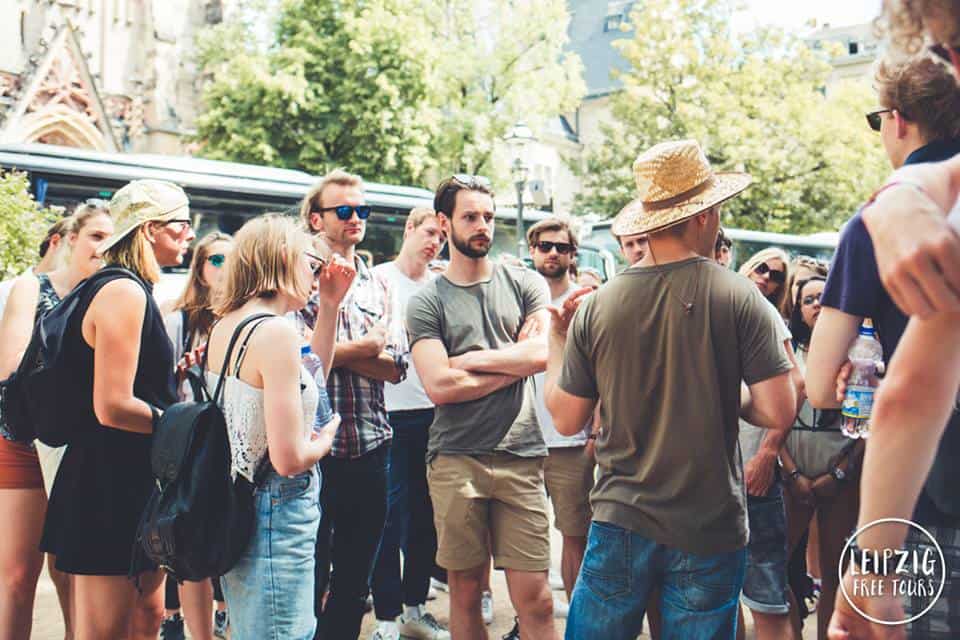 You are invited to the Inlinkz link party!