There’s nothing better for a sunny autumn day than a tour by boat through Leipzig Plagwitz. We took a tour for you and will tell you what there is to discover.

We start at the Schreberbad and head up the Elstermühlgraben towards the west, parallel to Käthe-Kollwitz-Straße. There are also canals leading into the city, which are planned to be adapted to the existing connections from 2023 but only for smaller boats. The Schreberbad itself was opened in 1866 as a men’s bathing establishment, with the ladies being added just under 2 years later. War damage meant that the original size of the baths can now only be guessed at, and the baths used to be surrounded by old branches of the Weiße Elster. The adjacent allotment gardens date back to Dr. Schreber, who was born in Leipzig and founded the oldest gardens in Leipzig. The gardens have always served the recreation of the population and were initially also intended for self-sufficiency. Further along the route, we pass the former villas of some important publishers such as Brockhaus and Baedecker. The Villa Baedecker dates back to 1874/75 when it was built for the travel book publisher Fritz Baedecker in what was then Plagwitzer Straße. Following Soviet reprisals, the family left Leipzig in 1948, the FDJ took over the building and converted it into the “Georg Schumann” youth hostel, which it remained until 1998. Today the building houses a clinic. After that, we saw Leipzig’s oldest rowing club on the right – the academic rowing club and shortly afterward the DHfK rowing club. 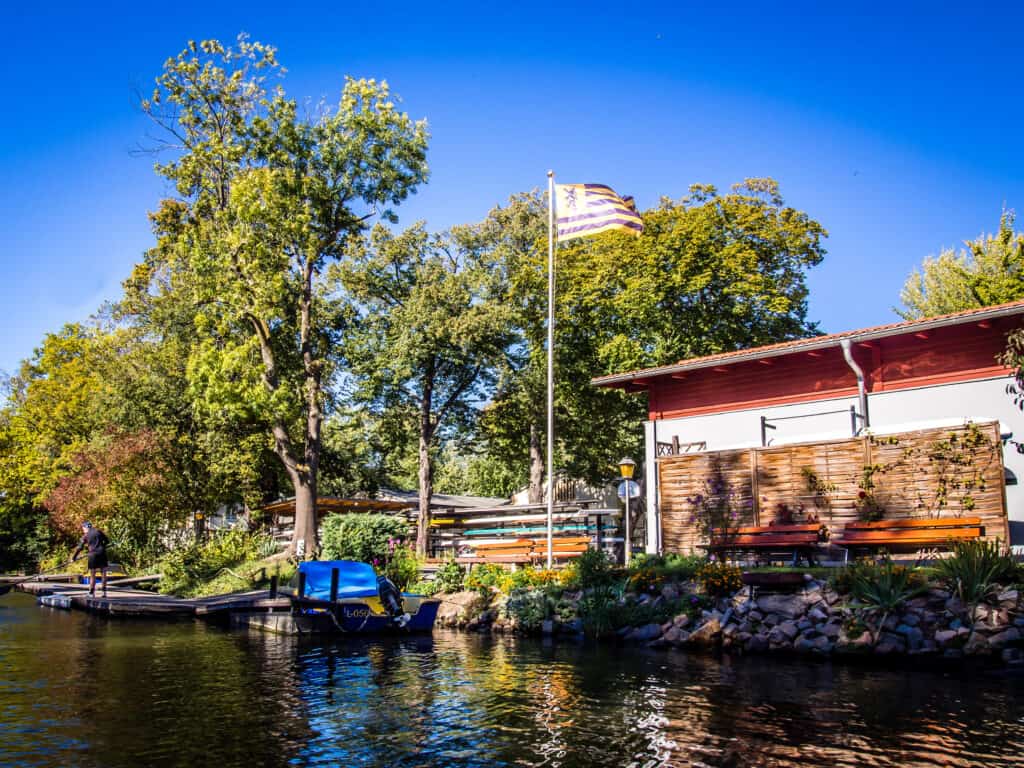 The palm garden (Palmengarten) itself housed a palm greenhouse until 1937; the Nazis demolished the building, but it remains a really beautiful garden to this day. We pass the Plagwitz Bridge and go up the Weiße Elster. Plagwitz itself has its origins in a small village with 20 farms. It owes its rise to Dr. Carl Erdmann Heine, born in Leipzig in 1809, a landowner, lawyer, visionary and industrial pioneer. In 1844, Heine began to drain and develop the marshy area along the Pleiße and built tenements here. In the following years, he promoted the development, railway development, and canalization plans in the area of Leipzig West and later Plagwitz, where he created railway sidings and in 1856 began the construction of the first section of a navigable canal connecting the Weiße Elster with the Saale. This still bears his name today. Wagons on light railway tracks were used for excavation. The remains of the gravel railway can still be seen today in the museum a little further up the canal.

We continue our journey and come across the huge facades of the former Buntgarnwerke (woolen yarn factory) Leipzig with its walls reminiscent of Hamburg’s Speicherstadt. Starting in 1872, the building complex was built over the course of 4 decades. Today it houses flats and beautiful lofts (Elsterlofts) with ceilings up to 6m high. With over 100,000 square meters of floor space, the former Saxon wool yarn factory Tittel & Krüger is today Germany’s largest industrial monument and Europe’s largest building complex of the Gründerzeit. In 1950, the Leipzig City Council took over the company as a trust enterprise, and in October 1952 it was transferred to public ownership under the name VEB Leipziger Wollgarnfabrik. In 1978, 1980, 1982, and 1984, the woolen yarn factory won the gold medal at the Leipzig Fair.

Following the water further to the right, we come to the Karl Heine Canal proper, past the former broadcasting site of the MDR Riverboat, and move from Schleusig to Plagwitz. The canal itself has been navigable again since 1996 and since its extension a few years ago it leads to Lindenau Harbour. We approach the Stelzenhaus, built between 1937 and 1939 by the architect Hermann Böttcher for the corrugated iron factory Grohmann & Frosch. Around 1914, when almost two-thirds of the factory site had been built on, it was decided to buy the embankment to gain more building land. To make the best possible use of the space, a structure was erected on stilts before the Second World War, after which the building was later named. After 1945, the Stelzenhaus was used by the successor to the Rudolph Sack company, VEB Bodenbearbeitungsgerätewerk. After it stood empty after 1990, it was reopened in 2003 after extensive restoration with studios, flats, and a restaurant.

We then pass the huge industrial wasteland of today’s Jahrtausendfeld, once the Rudolph Sack agricultural machinery factory. The Leipzig soil cultivation equipment factory was one of the most important agricultural machinery manufacturers in the former GDR, especially in the 1950s and 1960s. Today the company belongs to Amazonen-Werke.

After this beautiful trip on the canal, we now turn around and start our way back. If you want to learn more about Leipzig, you are welcome to join us on our guided tours of the city. We look forward to seeing you!